skip to main | skip to sidebar

In The Absence of Black Shame

Shame – “The painful feeling arising from the consciousness of something dishonorable, improper, ridiculous, etc., done by oneself or another: He/She was overcome with shame.” The opposite of ‘Shame’ – Pride, Self-Esteem, Self-Respect.

As long as I can remember I have been somewhat introspective. Maybe it was all the sociology, psychology, and self help books that lay around the house as a kid. I’ve never really had a problem looking at myself and honestly pointing out my flaws and short comings. That doesn’t mean that I changed, but most of the time I was fully aware of my faults. Most people and groups (social, racial, economic) I interact with don’t seem to share this same introspection. In fact I often face passionate defensiveness when I point out a particular flaw. So I expect and can almost guarantee that I will face passionate criticism from my community with my position on the lack of ‘Shame’ in the Black Community, but criticism doesn’t make my position invalid.

I recently read an article that quoted a study that showed in 2008 72% of Black children we born into a single parent household. It is no longer an anomaly to see girls from 14-18 pregnant. We have culturally embraced being a “Baby Mama” or a “Baby Daddy”. Multiple births by multiple males (not fathers) are rarely criticized. And many other examples that I think have contributed to a continued decline in the Black community. I have to wonder where the shame is. When the church no longer consistently scolds teenage pregnancy where is the shame? When it’s cool in school and the community to be pregnant with no education, no job, and no husband where is the shame. It’s an insidious pathology when we have made our shame our pride. We have created and reinforced a community that attaches pride to a pregnant teen. Young girls have spoken of a renewed level of self-esteem and self-respect when they are pregnant without a dime, education, or plan.

Children of unmarried mothers of any race are more likely to perform poorly in school, go to prison, use drugs, be poor as adults, and have their own children out of wedlock. If I am going to be a statistic I would rather choose my statistic. In other words if statistically I have a higher chance of being successful financially by graduating from school then that is the standard. If statistically my children will have a better more productive life with a complete family then I will choose not to conceive until this is my situation. I’m not naive enough to think that everything is guaranteed but there has to be a plan for success.

James Brown sang, ‘I’m Black and I’m Proud’ not too long ago. During a time where we were proud of education, proud of family, and proud of success. There needs to be a serious reevaluation of what ‘Pride’ means to us today. In the same vain we need to define what ‘Shameful’ is. I unfortunately struggle to clearly define what’s truly shameful in the Black community today. ‘Snitching’ comes to mind. Being a Black republican or speaking out against President Obama, but all of these examples are meaningless in regards to changing the plight of the Black community. I know it’s hard to truly be introspective when it comes to self, the church, and our community but it is only with that honest evaluation and subsequent actions, that we will ever make any meaningful progress.

Everybody is video conferencing - Are you?

They say a picture is worth a thousand words, so a video should multiply that effect exponentially. As data speeds become faster and cheaper, camera quality achieves greater quality and clarity, video conferencing is slowly becoming a mainstream reality. New technology generally develops on the fringe, as Facebook and Twitter did, then gradually creep into the mainstream. As businesses evaluate technology and develop a strong value proposition, adoption quickly follows.


Below is a snapshot of several video chat applications that are out there that deserve serious attention. The good news story is these applications are either free or only requires small fees for premium services.

TinyChat’s early adoption from the teen demographic gives it a certain stigma. But when you look at the technology, delivery, and interface it does what it says it does. TinyChat requires no installation. You can quickly set up video conferences of up to twelve people. I have used the application several times and it has performed as advertised. The disadvantage is the user interface is not as professional as Skype or ooVoo so enterprise may only use it for internal communications instead outside customer interaction. 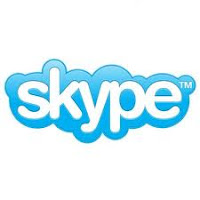 Skype has definitely established itself as the leader in this space. Skype provides the ability for voice conference, chat, as well as video conferencing. The term, “just Skype me” has become as synonymous with VoIP communication as “Xerox copy” is to the paper reproduction business. Skype’s new 5.0 now gives users the ability to host multiple user video chats. Users can also integrate their Facebook feeds into Skype for added convenience. 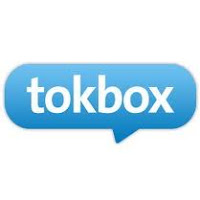 Another application that doesn’t require any installation is Tokbox. The basic version supports up to 20 people, and you can easily invite others via email, Twitter, or Facebook. The video quality is good and the invitation process makes this extremely user friendly.

Unfortunately ooVoo many times gets confused with Ooma which is a VoIP device that doesn’t require a PC. ooVoo supports a six person video conference call and is gaining in popularity. They supported multiple video users prior to Skype 5.0 and they leveraged it effectively. The ability to transfer your Skype contact list is also a strategic and convenient feature. The user interface and design lend well to a professional enterprise organization as well as for general personal use.

Let me know your comments.
Posted by Speaking In Tongues at 12:23 PM No comments:

Posted by Speaking In Tongues at 1:14 PM No comments:

Today the public debate in the black community is, "should we show up for the Democratic Party for midterm elections or stay at home." The reasons are varied; some based in fact some just lazy excuses for apathy. What I find interesting is when we step back and look at the two major parties, do we really identify with either one.


Generally speaking the African American community shares conservative views. Most don't delight in paying excessive taxes to the state or federal government. We are not gay/lesbian advocates. We have a strong religious background which directs us in most of our activities. We are disgusted at big government spending which mostly doesn't trickle down to our communities and the no-bid contracts that miss minority contractors. And we believe in competition. These are all current Republican Party issues.
It seems the great divide is the Republican Party’s inability to acknowledge or validate that racism and bigotry still exist. To pretend that the playing field is level when current statistics show the inequities only suggest one thing to African Americans – that they are lazy and unmotivated. I heard an analogy one day that fits this scenario. The basic premise is when you look at sports, where the game is played in the open, the rules are defined ahead of time and are consistent, African Americans thrive. Not only do they thrive, there is a level of motivation and vigor to participate. When you look at the job market, financial institutions, the criminal justice system, and education, the rules are often changed to fit the players. Deals and agreements are not presented in the open arena but behind closed doors which lend to corruption and nepotism. Corruption and fraud are uncovered but consequences never seem to materialize. So it’s comparable to a basketball game where the minority team is required to run ten miles to the game and only play with 3 players. When they lose the other team says we played on the same court, the same ball, and the rules didn’t change. Understandably the minority team just doesn’t want to play anymore and they sit out – ‘Apathy’. Now a different party comes along and says that they can get rid of the ten miles and play 5 on 5, plus we will advocate lowering your goal and giving you shoes that can make you jump higher. Out of frustration it sounds good and we follow that party.

In reality all African Americans want is a level playing field and when the rules change or have been broken that it is exposed by a referee, maybe even instant replay. Consequences must be real and equal for both parties. But instead we have been caught up as the political football in the two party game of politics which we never seem to win. Will things change? Is there a need for a third party?
Posted by Speaking In Tongues at 12:19 PM No comments: 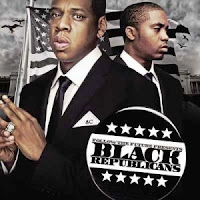 I begin this blog with an image that at first glance seems controversial. Jay Z and Nas, two of Hip Hops greatest MC's, lyracist, artist, poets depicted as Black Republicans. In reality it's the title of a track on NAS's "Hip Hop is Dead" Album. The stark contrast of ideas and experiences is what I hope to bring to this forum. I hope address issues that are both important, silly, and thought provoking. If anything you will get my perspective, my thoughts, which many times are outside the box.
Posted by Speaking In Tongues at 4:08 PM No comments: